8 Facts to Set the Record Straight About Fixed Wireless Internet

The following article was written by our good friend Skyler Ditchfield, the CEO at California based GeoLinks and we couldn't agree more.  While Skywire Networks provides both Fiber and Fixed Wireless access methods (often both resulting in true diversity), Fixed Wireless is a key component of what we do as owners of one the largest networks in NYC.

Fixed wireless is one of the most reliable, cost-effective connectivity solutions in the marketplace. Despite a proven track record, many misconceptions persist about fixed wireless service. Some of this confusion stems from the early iterations of fixed wireless, some is the product of Internet rumors and some is based on simple misunderstanding of the different types of wireless connections. In reality, today’s fixed wireless solutions can be game changers for business in terms of cost, reliability, redundancy, speed of deployment and scalability.

Fact 1: Fixed Wireless is Not the Same as Satellite

Radio-based fixed wireless broadband connectivity is not the same as satellite-based Internet. There is far less latency with radio-based fixed wireless services and, perhaps more importantly, there’s no throttling that’s common with satellite services. Both are  vitally important at a time when bandwidth-sensitive video content already accounts for more than half of Internet traffic and will account for 80 percent in two years.

Fact 2: Fixed Wireless is Just as Reliable as Fiber

A persistent myth dating to the early days of wireless services is that fixed wireless is less reliable than fiber connections. Just as wired connections have moved past the dialup days of listening to electronic “beeps” and “bongs,” followed by “You’ve got mail!”, wireless technology has undergone quantum leaps forward. A fixed wireless connection running on licensed spectrum is not only as solid as a fiber connection, it’s more reliable, because a jackhammer, backhoe, flood or other disaster (natural or manmade) won’t take it down.

Fact 3: Fixed Wireless is Not Only a Rural Solution

While it’s true that fixed wireless makes an excellent rural broadband solution, fixed wireless is a fast and reliable solution in city environments as well. And, it’s more affordable to boot.

Fixed wireless connectivity sometimes gets lumped in with Internet conspiracy theories about the supposed (but also mythical) dangers of wireless radiation from mobile phones, Wi-Fi, Bluetooth and other wireless connections. In reality, as you are reading this blog, your body is absorbing up to five times the signal from FM radio and TV stations than you would if you were sitting right next to a wireless base station.

Fact 6: Fixed Wireless is Much More Than a Backup Solution

May people think fixed wireless solutions aren’t secure. This myth could not be further from the truth. Using our own company as a reference point, GeoLinks delivers the same military-grade encryption to business customers that it delivers under government contracts. Your connections are safe, reliable and secure.

With proper engineering, fixed wireless networks can withstand the elements. GeoLinks’ in-house engineering team begins a deployment by taking into account the terrain, historic weather patterns, rain fade and thermal ducting. Based on that data, the distance between radios and the required bandwidth, they choose the best frequency (or frequencies) and carrier-grade equipment for a weather-proof build. In addition, GeoLink’s adds multiple failover paths as well as a connection to a fiber optic backbone to ensure true network redundancy.

There you have it – just the facts about fixed wireless. 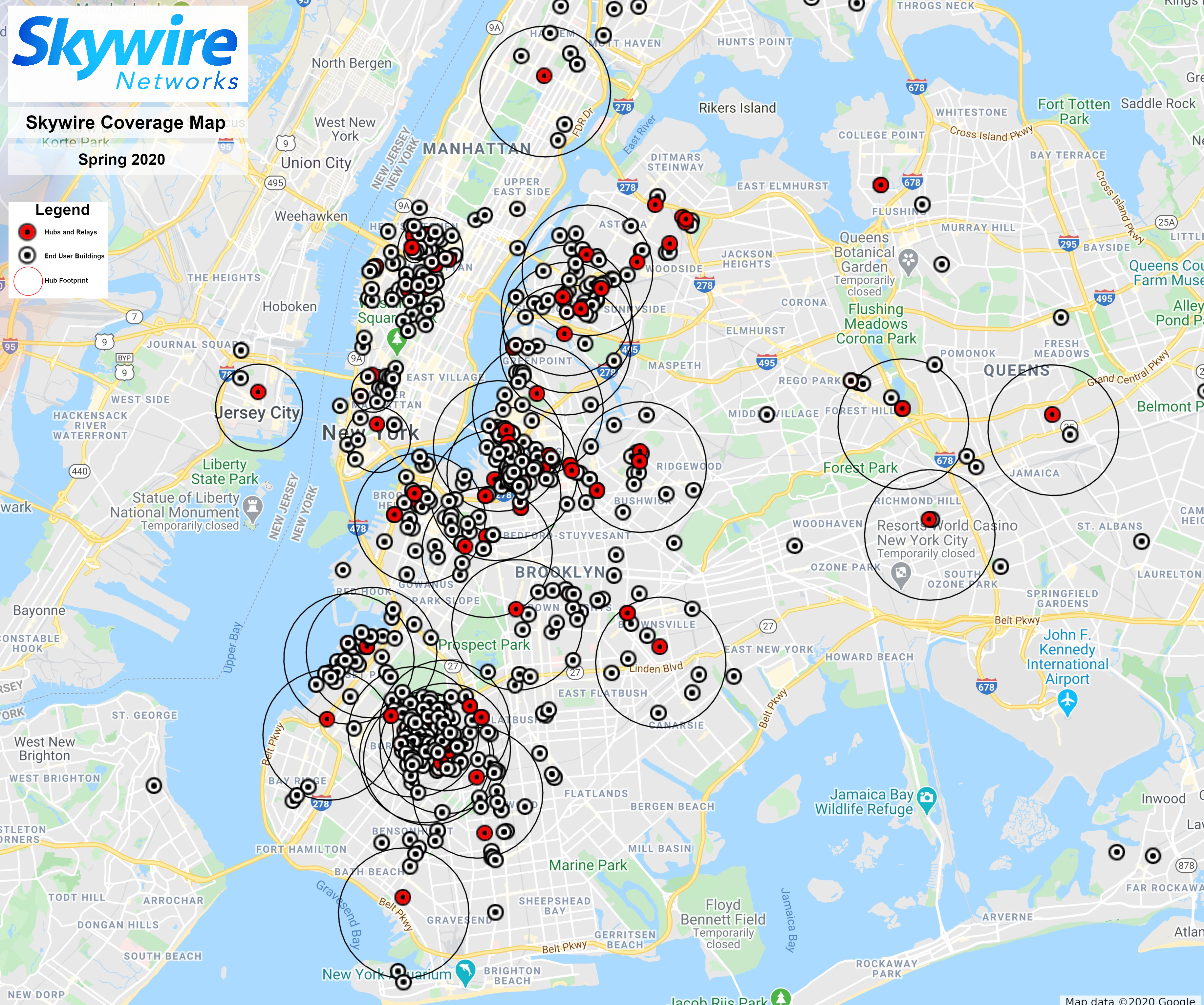 Skywire Networks is one of the most active and fastest growing Ethernet providers in New York City with more than 1,800 lit buildings, 50 neighborhood hubs and relays, and a near-net footprint of 100,000+ commercial buildings and residential MDUs. We provide SLA, fiber class throughput and connectivity to thousands of businesses in NYC.  We sell our services directly to end-users, through agents, channel partners and to wholesale partners via NNI connectivity. We sell Ethernet Private Lines, Internet Services and hosted voice services to both enterprise businesses and SMB’s at speeds ranging from 10mb to 10gb. Skywire Networks addresses the problem of poor fiber density in NYC in a multitude of ways by leveraging various edge technologies including Fiber and Fixed Wireless Access.