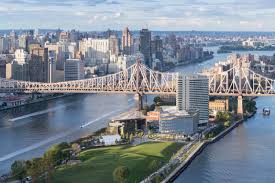 There is help on the way for Islanders whose phones regularly drop calls in the Westview arcade, the Good Shepherd Church plaza, the bowels of the Cultural Center, and elsewhere. At next Tuesday’s Board meeting for the Roosevelt Island Operating Corporation (RIOC), members will vote on a proposal to increase cellular service on the Island by laying down fiber lines to new, small cell towers attached to lamp posts along Main Street.

The goal is higher capacity and better in-building coverage. Crown Castle has worked with RIOC to determine the Island’s dead spots. Together, they identified specific locations to install new small cell solutions networks based on a careful and thorough review of existing poles and neighborhood sites.

Meanwhile, at the other end of the Island, Cornell Tech is getting a boost of a different sort. When looking for a way to bring high-speed internet access to its high-demand campus, the school made the surprising choice to not lay down fiber. Instead, they looked to the sky.

In a nod to the school’s innovative architecture, focus on sustainability, and investment in New York’s tech industry, Cornell Tech relies on Skywire Networks, a company that connects commercial buildings to their network via microwave radios which are installed on the roofs of tall buildings. Skywire CEO and co-founder, Alan Levy, has spent the last five years building the company to deliver high-quality, high-speed internet to buildings traditionally underserved by cable and copper-based carriers.

“Fiber is a terrestrial network. It’s in the street,” says Levy, “You have to dig up the roads in order to install it.” According to Levy, most of the fiber in New York City was installed in midtown and in the financial district because those businesses are the ones that could afford it. But in other parts of the city, Levy says, there’s much less fiber installation (less than 5 percent according to his research), which means businesses and buildings have to rely on an old copper technology, and, in many instances, cable technology, for broadband. “That’s the problem we are solving via Skywire.”

In the scheme of fiber haves and have-nots, Roosevelt Island is a have-not. “During construction, many times they will coordinate fiber, and all the conduits inside the building will be built for that,” he says. “Part of it, obviously, has to do with it being on an Island. It’s expensive to dig under the water and lay fiber, particularly for the size of Roosevelt Island. Most times, when fiber is used to deliver high speed broadband, you dig up the street from point A to point B.”

Skywire’s technology connects to the building, the signal comes through the sky through point-to-point radio equipment. In Cornell Tech’s case, it connects the buildings at Cornell Tech to the Skywire network in Long Island City, where there is fiber. The strategy, says Levy, is to deploy fiber, and then that last mile or so use the microwave radios to deliver the same type of speeds that fiber gets.

Levy says that his company’s installation at Cornell Tech will not impact the rest of the Island, but that he would be happy to work with RIOC in order to connect the rest of us. He is aware that there isn’t great service here. “To the extent there are other needs outside of Cornell Tech, we can address those with the building owners themselves because we can connect to Roosevelt Island.”

For those who spend most of their time on a mobile phone, the Board is expected to vote December 19 on a plan to connect us with new cell towers being installed around Main Street.

In a presentation given at RIOC’s Real Estate Development Advisory Committee meeting on November 9, Joseph Klem and Esme Lombard from wireless infrastructure provider Crown Castle proposed building and maintaining a fiber ring around Roosevelt Island to supply the Island with reliable cellular connectivity. Part of their plan requires them to provide four strands of dark fiber around the Island.

They will then install additional small cell towers in weak-signal or high-data-traffic areas around the Island. Crown Castle is a neutral cell host system, and is designed to host all carriers; “every carrier has a chance to come in,” said Klem.

The good news is that, unlike the Con Edison work that was recently done on the Island, Klem says this work would take only three to six months, and that it can go right on the edge of the curbline.